Will Smith Dominates Social Media, And For Good Reason

Will Smith has been a Hollywood icon for the better part of two decades. The rapper turned actor was first known for his music, breaking through in 1988 with the hit single ‘Parents Just Don’t Understand’. Partnered with DJ Jazzy Jeff, the duo made a name for themselves in the late ’80s and early 90’s with a string of hits including ‘Parents Just Don’t Understand’ and ‘Summertime’, both of which received a Grammy Award. And then in the ’90s, after auditioning for the Quincy Jones produced television series ‘The Fresh Prince of Bel-Air”, a role Smith had little faith he would get, he embarked on a television and film career that has spanned nearly three decades. And the rest is history.

This week, Instagram added a face filter celebrating the Fresh Prince himself, where users can don the iconic denim hat Smith famously sports in the hit television show. It seems more than fitting that Instagram decided to honor Smith with this Fresh Prince inspired filter, not only because of his position as in the entertainment industry as an A list actor; but also because he is an equally bonafide star on social media.

The irony is that Smith is still fairly ‘new’ to Instagram. While appearing on the Ellen DeGeneres show in December of last year, DeGeneres — who has just under 59 million followers on Instagram — taught Smith everything he needed to know about the photo-sharing app, including how to take selfies (with a duck face), the infamous mirror selfie, and a proper Throwback Thursday (#TBT). Later in the show, Smith went on to announce he had joined Instagram and followed the news by posting the pictures he shot with DeGeneres during the appearance on his shiny new Instagram account. He very quickly accumulated almost 1 million followers within days of starting his account. 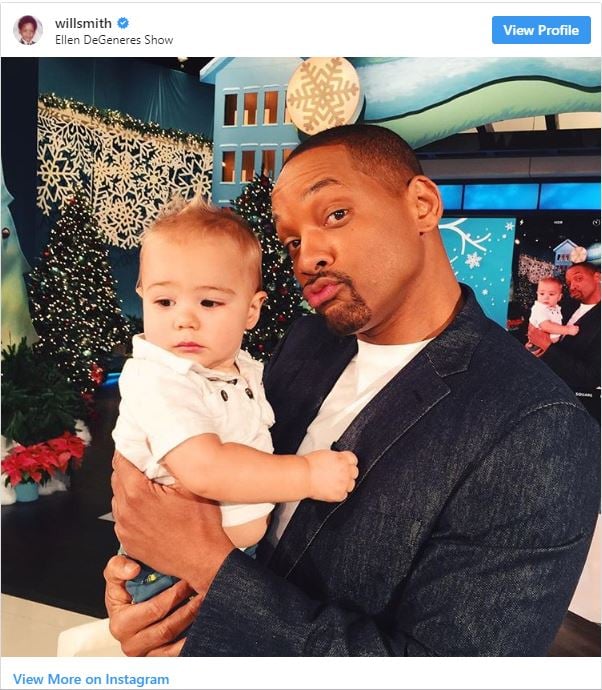 Smith took to the duck face and selfie craze fluidly, and he was off and running from there. The follower growth he accumulated over the first year he activated his account was unprecedented. In the graphic below, you can see the degree of his exponential rise on social, from a non-existent account in July of 2017, to nearly 15 million followers in the span of 9 months. This kind of social growth is unprecedented, even for A list celebrities like Smith.

Social Blade compiles data from YouTube, Twitter, Twitch, Daily Motion, Mixer, and Instagram and uses the data to make statistical graphs and charts that track progress and growth on social media accounts. They include information such as estimated earnings and future projections, providing both numerical data and easy-to-read graphs. Statistics are freely available to anyone using their website or smartphone apps. You can see below that Social Blade ranks Smith in the upper echelon of influencers, grading him an A++ in social ranking. He averages nearly 1.4 million likes and over 16,000 comments on his Instagram posts and is ranked in the top 50 overall in terms of followers on the platform. Quite a feat for someone who has only been on Instagram for a little over a year.

He has always been known for his comedic presence, and while building his Instagram portfolio, he playfully trolls his own friends and family on a regular basis. Sometimes even himself. When his dear friend Halle Berry’s birthday came around this year, Smith wanted to give her a shout out on his ever-growing Instagram account. Always the funny man, Smith honored his friend by posting a picture of them ‘together’ in a bizarre but hilarious fashion. Check out the video below.

But Smith isn’t just prankster when it comes to utilizing his social clout. While he’s certainly recognized for his jovial antics and comedy roles, he’s been equally recognized for his serious roles in films like “The Pursuit of Happyness” and “Seven Pounds”. Often thought-provoking, wise and insightful, Smith has regularly made appearances on talk shows, podcasts, and interviews where he waxes poetically on subjects around philosophy and spirituality. His words of wisdom and inspiration have garnered praise from fans who are often vocally inspired by his insights. And that aspect of his personality is on full display on his social accounts as well. Smith often uses his platform as a public figure to enlighten his fans and followers alike. 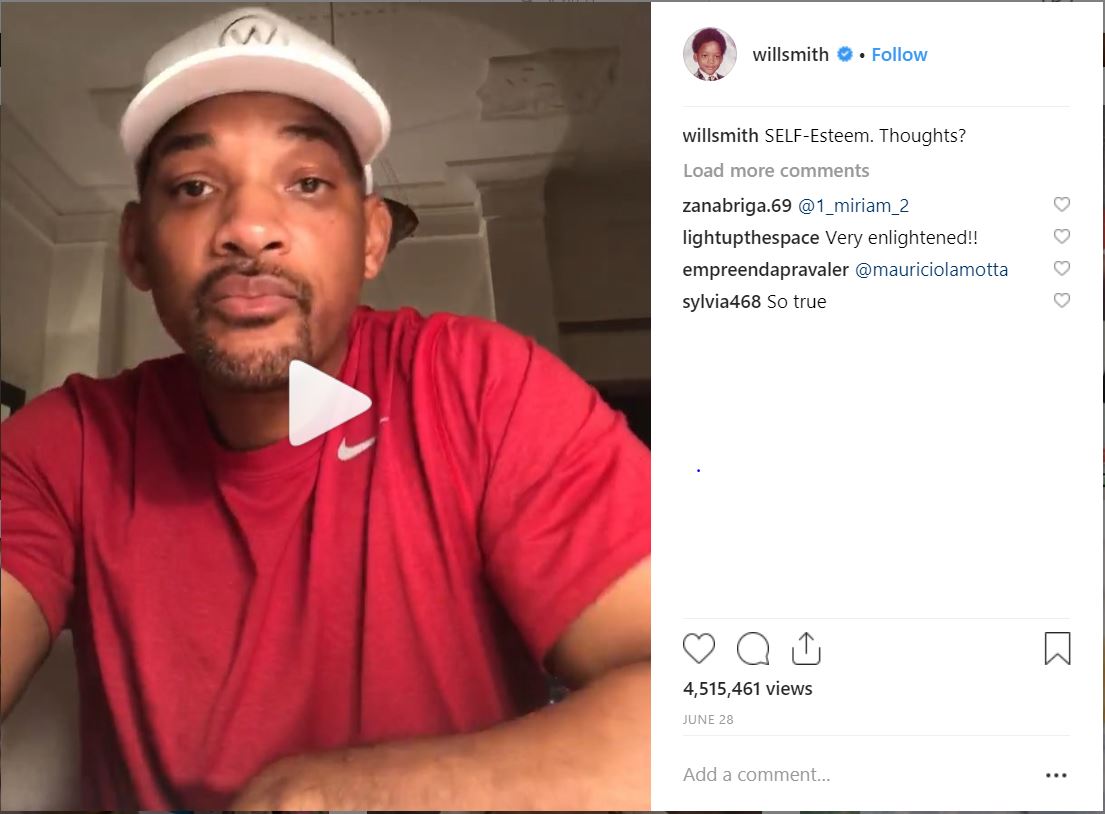 Some would argue that being a megastar the caliber of Will Smith gives you a leg up on the competition in regards to growing a presence on social media. And they wouldn’t be completely baseless in that claim. Having fame and notoriety definitely can hyper-accelerate the visibility someone receives on social media, and provide the type of head start that would-be influencers could only dream of. But what makes Smith’s case particularly special is his approach to the process. Much like the sentiments he communicates so eloquently, his direction on social media is one that many people can learn a great deal from.

First and foremost, he has his finger on the pulse of contemporary social media. Recently, Smith celebrated his 50th birthday by—wait for it—bungee jumping out of a helicopter. The idea started with YouTube channel Yes Theory, a group of three young men who enthusiastically embrace the idea of stepping outside of your comfort zone. The group challenged Smith in February, daring him to join the group in a jump from a helicopter. “For as long as we can remember, Will Smith has been a hero of ours,” explains one Yes Theory member, Ammar Kandil, in the challenge video.

Smith took the challenge in stride and decided to take part in the jump. This type of collaboration with a group of fast-rising YouTube stars shows the kind of foresight only a few outside of Smith himself possess; the ability to not only relate to his growing audience but also the intelligence to know the social benefits of collaborating with this day and age’s internet celebrities. You can check out Yes Theory’s vlog of the jump below. For those with phobias of heights, discretion should be employed while watching this video.

Secondly, another level of his appeal directly ties into the collaboration we just highlighted above; he’s tactical. Leveraging his fame and namesake is simply just an intelligent approach to developing and growing a social media presence. He doesn’t just post content for the sake of posting, or because he’s an already established public figure with little to gain from a well-planned post. Everything he does in regards to his social media is done with a purpose and clear intent. Sometimes it’s to be funny, other times to share knowledge and value, and often times to provide a lens into his life and personal values. When his son Jaden — who is a rising star of his own in the hip-hop world and starred alongside his father in the 2006 film “The Pursuit Of Happyness” — recently accumulated 100 million streams of his record ‘Icon’, father Smith re-created his sons’ music video for the song in hilarious fashion. He even donned the same gold grill Jaden wore in the music video for full effect.

Another element that makes Smith so successful on social is his relatability. Sure, not many of us can directly relate to being a multi-millionaire global star and one of the most recognizable celebrities on the planet. But like many of us, he has a family, he has overcome adversity and experienced his fair share of trials and tribulations. There’s a surprisingly accessible and relatable nature to Smith that appeals to a broad demographic.

Those traits are likely directly correlated to the success Smith has seen in his legendary career. And its evident in spades in the content he posts on social media. He’s transparent in his recollections of past experiences and the mistakes he’s made as a man, expressing a level of humility and self-awareness that is quite admirable. And he seems to pull this off with cunning authenticity that comes across both endearing and genuine. Smith recently appeared on Red Table Talk, an online show his wife Jada Pinkett Smith hosts, and spoke candidly about everything from his divorce in his first marriage, to intimate details about his and Jada’s relationship, and moments of existential crisis. The man is an open book. 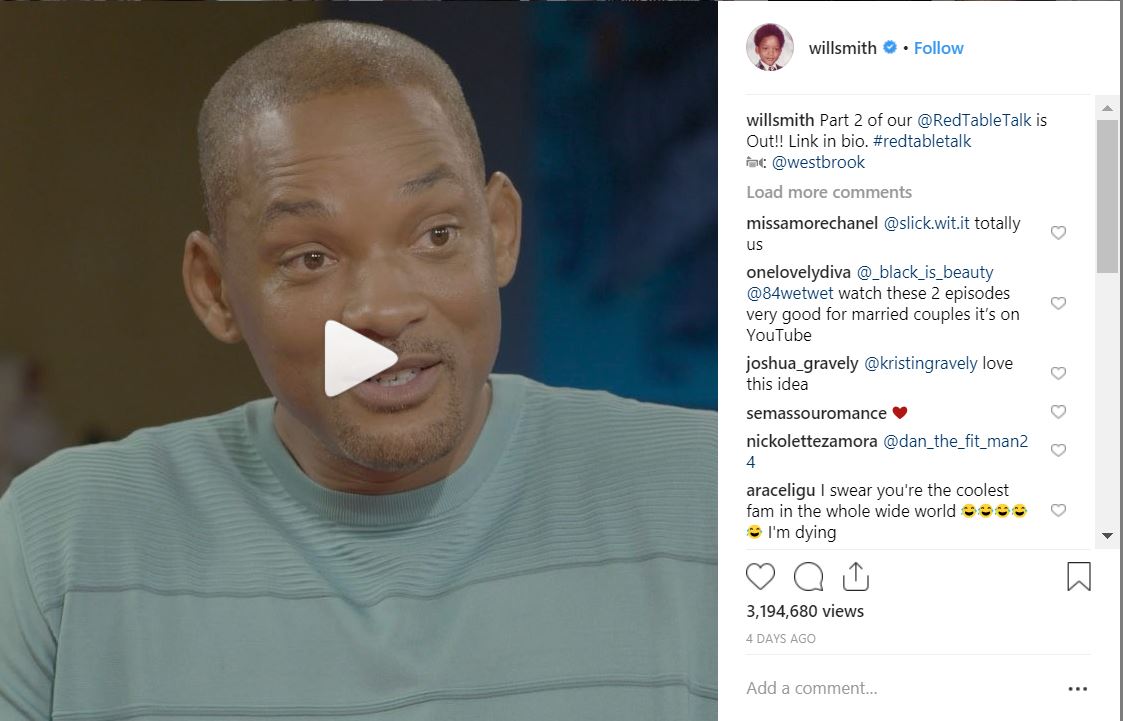 Whether on the silver screen or the social screen, Smith continues to build a legacy in entertainment that will inspire others for generations to come. And what he is doing on social media follows a similar trajectory of prosperity. Smith is a trailblazer in many facets, and his continued social dominance is as much a reflection of his acumen as it is a testament to his relentless work ethic. And he makes it look so easy. Maybe because it is for him.

The genuine nature of his content never seems to be trite or lacking in authenticity. That certainly makes it easy to enjoy. And the success he has seen from this authenticity only enhances the credibility of one of worlds’ most famous and admired entertainers. With no signs of slowing, Smith continues to amaze us with his engaging content. But for the kid from West Philadelphia, who went on to define the benchmark of success for musicians-turned-actors across the globe, his achievements come as little surprise to anyone these days. He’s the definition of a class act. And in a class all his own.

Dustin Hawley
With much of the madness caused by the pandemic now behind us, small businesses across the country are eager to capitalize on the holiday rush, with spending patterns and customer behaviors once again approa
Read post
Post link
Blog

Dustin Hawley
Instagram is quickly turning into a platform of choice for digital marketers, thanks to a solid base of influencers, great content quality, and one of the largest userbases of any social platform. In 2021, t
Read post
Post link
Blog

Dustin Hawley
In 2020, it seems like no one is impervious to rumors. The most recent round of tech gossip is about PayPal and how they were to acquire Pinterest.  Reuters and other media reported on the deal when sources
Read post