A few months back, I remember seeing a video with Sean Parker making an appearance on the digital news channel Axios. For those who don’t know, Sean Parker is the creator of Napster and the former President of Facebook. He was one of the original brainchildren behind the company and partnered with Mark Zuckerberg and Eduardo Saverin to bring Facebook into the mainstream near the beginning of the company’s inception. He was also portrayed by Justin Timberlake in the film ‘The Social Network’. During this interview with Axios, Sean Parker for lack of a better term, ripped into his former company while describing the consciousness of the companies creators to essentially exploit the psychology of the human mind when it was designing the sites features and functionality. In the video below, you can see Parker going into detail about the ideology behind the concept of the ‘social feedback loop’ and the awareness the company’s founders had around this behavior in it’s attempt to leverage its appeal and usage.

You can find the entire interview on axios.com for those interested in hearing Parker’s complete take. It’s not necessarily surprising to hear this sentiment being vocalized by Parker. He has been publicly critical of Facebook since his departure from the company in 2005, leaving in the wake of a scandal over a cocaine-related incident in North Carolina. This incident was loosely portrayed in ‘The Social Network’ near the end of the film. And Parker has been a lightning rod for controversy since his file sharing company Napster changed the way we consume music when it launched back in 1999.

But this idea behind the psychological influence of Facebook isn’t exactly a proprietary theory pioneered by Parker. Though he may have been intimately involved in the creation of the mindset behind the Facebook platform, the ripples of its effects are felt (and arguably noticed) in real time by many of the application’s daily user base. We all may seem to have some sense or grasp as to why we are so drawn to acquiring the social currency that Facebook provides but do we truly interpret the magnitude these behaviors have on our psyche? And maybe most importantly, on our sense of self worth?

Chamath Palihapitiya is a former Facebook executive (and co-owner of the Golden State Warriors) who weeks after the Parker interview on Axios, warned about the unintended consequences of social media at Stanford Graduate School of Business. In his discussion around Facebook and social media as a whole, he is quoted as saying that social media is “ripping apart” society and feels a tremendous guilt for his involvement in creating the network functions of the application. He notes that while he believes the companies founders and executives didn’t think there would be any “unintended bad consequences” to their application, he thinks in the “back, deep deep recesses of the mind, we kinda knew something bad could happen”.

It’s a compelling admission and incredibly intriguing lens into the thought process behind the evolution of the social media platform. The full interview can be found on YouTube, but the segment where he discusses this specific element can be seen below. It’s an introspective take on the subject and I highly recommend you view it.

The reoccurring theme of ‘social feedback loop’ and ‘dopamine’ continue to ring the ears of the masses. But is this simply dialogue constructed from the minds of those who feel a sense of personal guilt for what social media has become? Or are we just failing to acknowledge the true magnitude and merit behind these perceptions, and the impact these platforms have had on the very fabric of social human interaction?

Well, I personally think it is a combination of both. Because as Facebook and social media as a whole has evolved, so has the science behind its appeal and effect. Even before Sean Parker’s departure in 2005 (and Palihapitiya’s exit in 2011), studies were being conducted on the psychological influence behind Facebook and other platforms of social media. A 2004 study by Samuel D. Gosling and Simine Vazire of the University of Texas found that Facebook profiles provide the observer with just as much information about the users’ personalities as their bedroom or office.

Also, our initial interpretation of a user’s personality is accurate in most cases, and is revealed within the first few minutes of the interaction. Thus, Facebook can influence our self-esteem very directly by giving us the opportunity to control the way we present ourselves through the process of impression management – it can influence the way other people perceive us but most importantly, it can influence how we perceive ourselves.

The reoccurring theme of ‘social feedback loop’ and ‘dopamine’ continue to ring the ears of the masses. But is this simply dialogue constructed from the minds of those who feel a sense of personal guilt for what social media has become? Or are we just failing to acknowledge the true magnitude and merit behind these perceptions, and the impact these platforms have had on the very fabric of social human interaction?

Ok, so some of this information may seem like an exercise in what some might deem as stating the obvious. But if that’s true, why does there seem to be little to no restraint in our self control of utilizing and partaking in this ‘toxic’ world of social media? Well, if you ask Sean Parker and Chamath Palihapitiya, the answer is simple: we are all dopamine addicts. And while this may sound like a blanket diagnosis for many users (no pun intended), human psychology leads us to believe that there is at least a strong correlation to this broad characterization.

The numbers don’t lie. Look at these statistics from January of this year, that shows just how strong a hold Facebook has on the world’s general populous. The following chart depicts the monthly active user statistics for the world’s most popular social platforms. 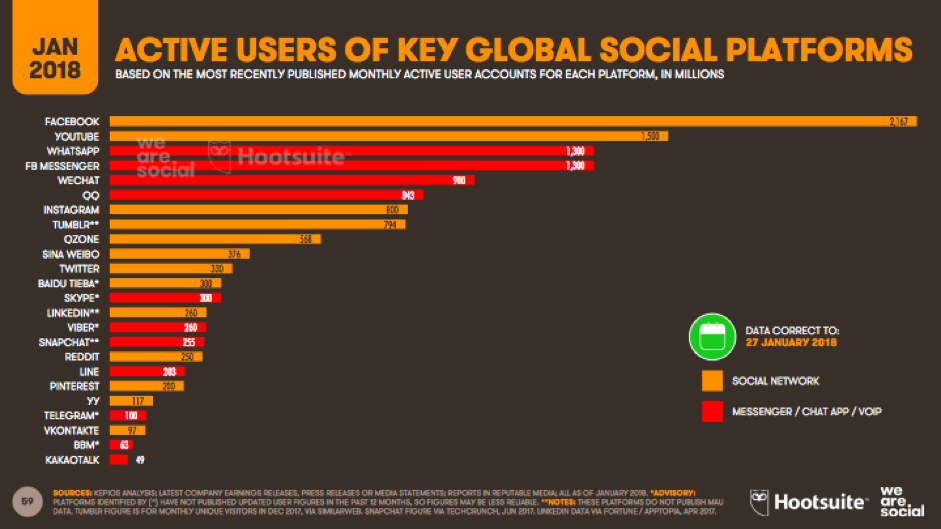 Wolfram Schultz is a neuroscience professor at Cambridge University in England. He and his colleagues performed a series of experiments on rats in the 1980’s designed around learning more about the effects of dopamine. These experiments were conceived mostly around the goal of trying to learn and authenticate the notion that dopamine was largely associated with physical movement.

This theory was well accepted at the time after it was discovered that Parkinsonism (a group of neurological disorders that give those inflicted, symptoms ranging from tremors to slow movement and stiffness) was thought to be caused by a deficiency of dopamine in the human brain. However, Schultz’s experiments began to change the theory and narrative around this assumption.

Schultz and his colleagues placed pieces of apple behind a screen and immediately saw a major dopamine response when the rat bit into the food. This dopamine process, which is common in all insects and mammals, is, as Schultz would state, at the basis of learning: it anticipates a reward to an action and, if the reward is met, it enables the behavior to become a habit, or, if there’s a discrepancy, to be adapted.

Whether dopamine produces a pleasurable sensation is unclear, says Schultz. But this has not dented its reputation as the miracle restorer of happiness. Dopamine inspires us to take actions to meet our needs and desires by anticipating how we will feel after they’re met.

“We found a signal in the brain that explains our most profound behaviors, in which every one of us is engaged constantly. I can see why the public has become interested.”

The idea of dopamine being the culprit of our addictive Facebook usage isn’t a foreign theory if you think about it. The release of this pleasure-inducing chemical is certainly not considered a recent discovery. In fact, there has been an association with ‘digital interaction’ and dopamine release far before social media ever was created. The best and most direct example of this in my opinion is the association between dopamine and video games, and specifically the addictive nature of them. The addictive element of video games has long been believed to be associated with dopamine release.

Many case studies have been released over the years that tied video game addiction to, essentially, an addiction of dopamine release. In fact, many psychologists and intellectuals alike have now begun to classify video game addiction as a mental disorder. The World Health Organization (WHO) in the final days of 2017 released their International Classification of Diseases, and included in that classification was the recent addition of ‘gaming disorder’. This was classified in a section of ‘disorders due to addictive behaviors’, and in my humble opinion, falls in line with a similar parallel to the addictive behaviors one may associate with the use of social media. So, do we then classify any addictive behavior associated with social media usage as a ‘mental disorder’?

Again, we find ourselves treading the waters of the blanket diagnosis. This can be a dangerous line to walk when we are creating dialogue around both the beneficial and toxic elements of modern social media. Especially when in a lot of ways, we are still in the infancy in the grand scheme of gaining a true sense and perspective of both the long term and short term effects that social media use has on the human psychology. Which is not to say that we have no data or basis to form these hypothesis either. The dialogue and studies noted above prove just the opposite.

However, the full spectrum effects, most notably in the long term, are still yet to be seen or studied in depth. This is simply due to the fact that we are still only in the first decade or two of this revolutionary vessel for social interaction. The timeline is still creating itself as we speak. But have people like Sean Parker and Chamath Palihapitiya metaphorically created a monster? Or are we just seeing our natural human tendencies manifest themselves in a new, digital realm that our predecessors didn’t have the access or exposure to? The jury is still out.

Reach out to us and let us know your thoughts!

Dustin Hawley
The COVID-19 pandemic has had a massive impact on the lives of nearly every living person on this planet. Aside from the toll it has taken on the health and wellbeing of citizens around the world, it has als
Read post
Post link
Blog

Dustin Hawley
2020 was an absolute rollercoaster ride. With COVID-19 ravaging the globe for nearly a full calendar year now, people all across the world have been trying to adapt to the new normal. Back when government of
Read post
Post link
Blog

Dustin Hawley
Twitter’s new frequency capping option is set to empower marketers by giving them substantially more control over when and how often individual leads are exposed to ads.  Why does this matter? How can mar
Read post