Byte, the long-awaited follow-up to Vine, launched last Friday to somewhat of a surprise to the general public. The app is currently available in the app store for iOS and Android devices.

It’s a familiar approach for social media aficionados; users on Byte can shoot or upload 6-second, looping videos. The app has all the standard features of today’s popular social platforms, including a home page feed, explore page, notifications, and profiles. However, Byte currently lacks many of the more advanced creative/editing tools that have become staples on platforms like Instagram, TikTok, and Snapchat.

today we’re bringing back 6-second looping videos and a new community for people who love them.

it’s called byte and it’s both familiar and new. we hope it’ll resonate with people who feel something’s been missing. https://t.co/g5qOIdM8qG

These creative tools and features are likely to roll out in the coming months if Byte plans to keep pace with the other micro-video creation apps mentioned above. Byte founder Dom Hoffman, who also created Byte’s predecessor, Vine, acknowledged the new video looping app will experience some growing pains over the next few months as it acquires a user base, fixes bugs, and implements new functions and features.

Vine co-founder Dom Hofmann sent out a tweet back in November 2018 that broke the internet. Ok, so it wasn’t Kim Kardashian popping champagne on the PAPER mag cover-esque breakage, but it was big in its’ own sense. Back in 2017, Hofmann said he was working on a “follow-up” to the popular video looping app. Unfortunately for those looking forward to a relaunch, a few months later Hofmann stated he was delaying the development of Vine 2.0 due to funding and legal concerns. However, Hofmann took to Twitter back in 2018 and provided a somewhat vague, yet equally direct update to the project. “Our new looping video app is called Byte. Launching Spring 2019”. 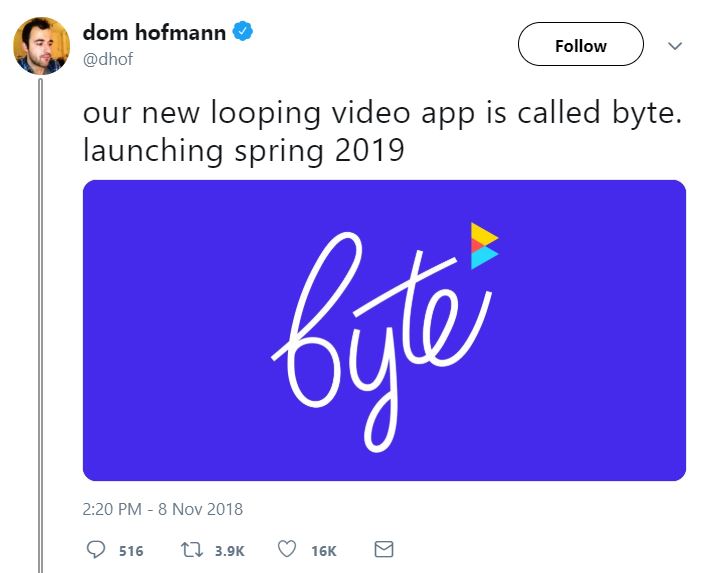 It was widely assumed that the app would be based on a similar premise to the original Vine app: create or post video clips that continuously loop. Hofmann said the sequel would be named Byte and would be released in the spring of this year. The entrepreneur, who had been working on & off on a spiritual successor to the now-defunct short-form video app, also tweeted out the new company’s Instagram handle and website domain.

Twitter acquired Vine in 2012, shortly before it launched to the public. In spite of what many perceived to be strong popularity at the time, Twitter abruptly shut the service down in 2016. Vine served as a career-launching platform for many online celebrities and musicians, but Twitter attributed its shutdown to monetization issues. Many of the early Vine ‘celebrities’ went on to continue their influencer careers on competing platforms the likes of Instagram, Snapchat, and Patreon.

Hofmann said Byte was officially the project formerly known as v2, which had a development process built around transparency, with dedicated fan forums starting in November 2018 and continuing for about 6 months. But Hofmann postponed v2 in May of last year as mentioned above. In addition to the monetization issues referenced, he also stated that his day job running an immersive entertainment studio called Innerspace VR played into the decision to postpone the project indefinitely.

Hoffman has made it clear on many occasions that he plans to focus on monetization options for creators early on with Byte. Though the details are still a bit of a work-in-progress, Byte plans to launch a pilot program for its partners. The company explained in a tweet: “Very soon, we’ll introduce a pilot version of our partner program which we will use to pay creators. byte celebrates creativity and community, and compensating creators is one important way we can support both.”

When asked if Byte would be offering ad revenue sharing, tipping, or other options to partners, Hofmann told TechCrunch: “We’re looking at all of those, but we’ll be starting with a revenue share + supplementing with our own funds. We’ll have more details about exactly how the pilot program will work soon.”

What Does The Release of Byte Mean for Marketers?

Since its launch last Friday, Byte is ranking as the top free app in the iOS app store. This means that the currently darling of social media apps, TikTok, just got pushed down to the number 2 spot.

We recently discussed the release of Byte, and what it means for marketers during a recent LinkedIn Live with Ray Ligaya, our Head of Talent Relations here at Viral Nation. Ray is particularly qualified to discuss this monumental release, as he himself was a star on the now-defunct Vine platform. You can check out the video below!

The end value for Byte may be substantially different from TikTok. But a video-sharing app is a video-sharing app, and if it’s going to survive (and thrive), Byte will need to display some substantial revenue-generating capabilities. It will also need to cultivate a community that looks and feels completely different than that of TikTok, in order to garner its own unique appeal from brands and marketers alike. It’s too early to tell, but will Byte end up being the rival of TikTok that many believe it will? Or is it destined to fall out of favor in the fashion of its predecessor Vine? We’re all along for the ride to find out.

We can help your brand
go viral on social media.

Dustin Hawley | Thursday August 08, 2020
Instagram is attempting to make a power move that it hopes can lure creators away from the popular app by rolling out a direct competitor; a new feature it calls Reels.  The feature launched on both iOS and
Read post
Post link
Blog

Using TikTok to Promote Your Business in 2020: 5 Tips

Dustin Hawley | Friday July 07, 2020
What began as a platform to spotlight short, often hilarious videos has quickly grown into one of the most popular and highly-downloaded social media platforms in the world. TikTok’s emergence as a social
Read post
Post link
Blog

Dustin Hawley | Thursday July 07, 2020
Influencer marketing is more than a fad. It’s a practice that has more than proven itself to be a highly effective marketing strategy in today’s digital age. And with no signs of slowing down in
Read post