With the holidays in full effect, Black Friday and Cyber Monday have officially come and gone. Companies and brands around the world activated a plethora of jaw-dropping deals and promotions to whet the shopping appetites of consumers. Companies like Amazon just announced that it saw it’s single biggest shopping day–in terms of the total number of items sold–in the company’s history, with millions of people perusing the site and purchasing discounted items for the holiday season. 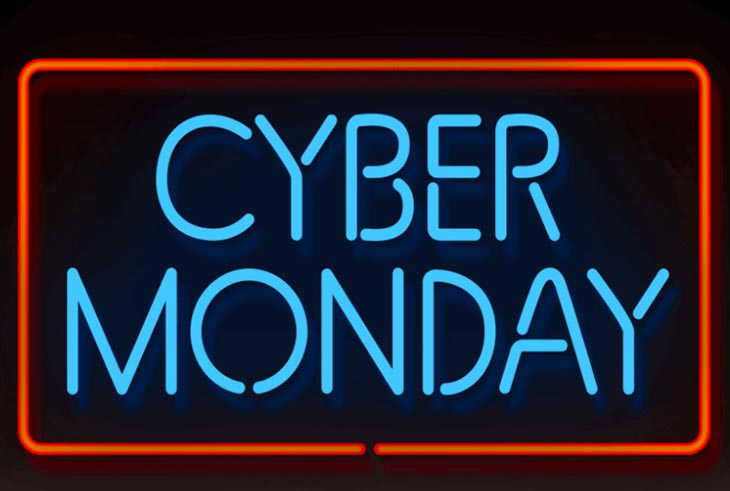 Walmart will continue to offer free two-day shipping for items over $35 on Cyber Monday and throughout Cyber Week. And social media as a whole is abuzz with deals being promoted by some of your favorite influencers. Here are some of the highlights from the biggest online shopping day of the year.

Across five days from Thanksgiving through Cyber Monday, Amazon said customers ordered a staggering 180 million items via its U.S. site alone. As mentioned above, Cyber Monday was Amazon’s biggest shopping day of the year. So what was their highest selling item? In the U.S., the best-selling item at Amazon.com on Monday was the all-new Echo Dot smart speaker. Amazon has said they sold “millions”, though the company declined to offer a specific figure beyond that statement. Other top sellers included Bose QC 25 noise-canceling headphones, Michelle Obama’s autobiography Becoming, and everyone’s favorite party game, Jenga.

“Black Friday and Cyber Monday continue to break records on Amazon year over year, which tells us that customers love shopping for deals to kick off the holiday shopping season,” Amazon’s Jeff Wilke said in a release. 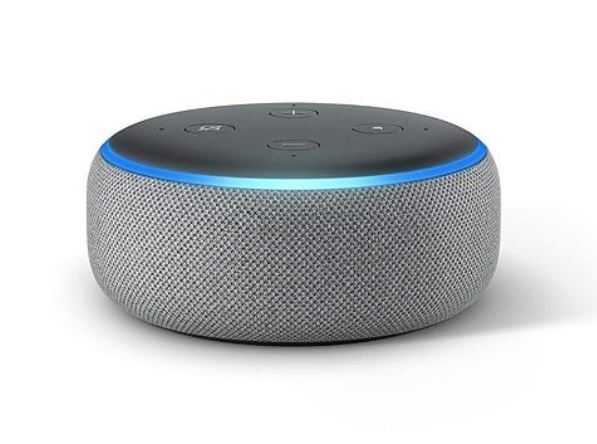 Influencers and YouTubers got in on the action

It’s no secret that social media is a desirable forum for discovering great sales and promotions on your favorite products from top brands, especially if you follow them on their social accounts. If not, it’s likely you have still been exposed to these promotions through targeted marketing on your social channels. But it’s not just the traditional marketing channels that have been at the forefront of this season’s holiday advertisements.

A number of high profile social media influencers pitching their own products to their audiences got in on the action, offering deep discounts on their brand merchandise. YouTube giants like Rhett and Link, for instance, had deals on their ‘Mythical’ brand products. 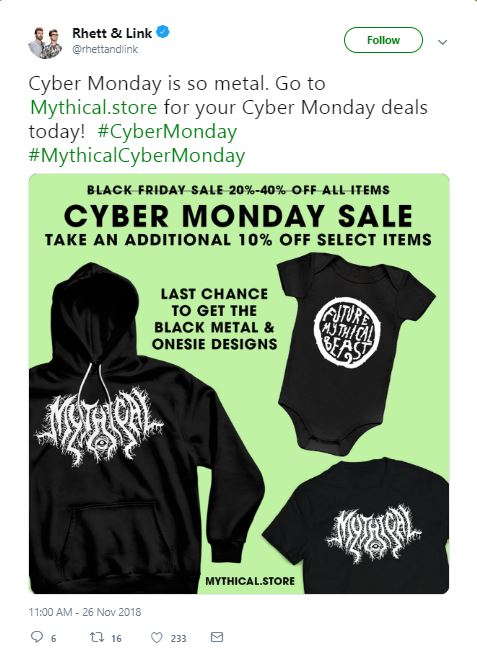 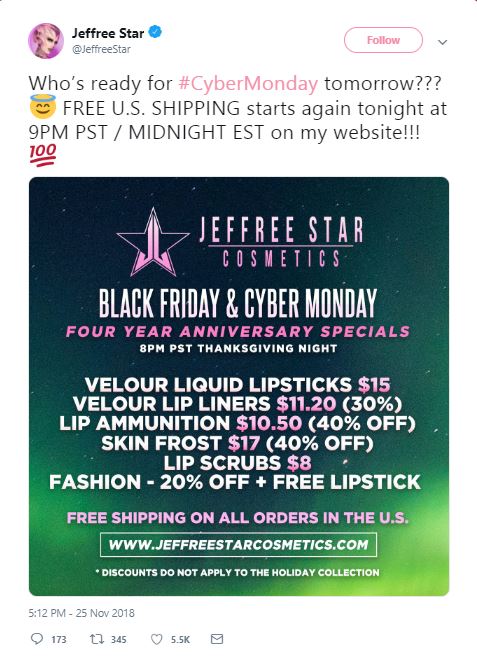 Even YouTuber Tana Mongeau joined the festivities with 30% price cuts on her merch. 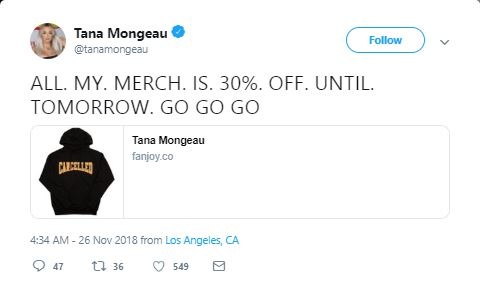 In 2018, as many as 75 million people were expected to shop online on Cyber Monday, according to the National Retail Federation, spending up to $8 billion. It only makes sense that your favorite social media personalities utilize their influence and capitalize on the deal-hunting sensibilities of their fans.

Big box stores banked on a big Cyber Monday, a revealing sign of the times

While Cyber Monday has been relevant for over a decade, it’s still perceived to some degree or another as the stepbrother of sorts to its close relative, Black Friday. While brands offer substantial shopping deals across Friday and Monday–both in-store and digitally–big-box retailers are relying more heavily on their online sales revenues than ever before.

The Gap, which is struggling, offered 50% off every item, including an additional 10% for online specials as well as free shipping. Kohl’s offered 20% off all items between Saturday, November 24 and Wednesday, November 28, in what was billed as Cyber Week. Shoppers were also offered $15 Kohl’s cash for every $50 spent. The US economy is strong, with healthy consumer spending and low gas prices. Retailers all looked to capitalize on the increase of this disposable income and boost their own bottom lines in the process. Nearly every retailer who took part in Cyber Monday offered free shipping, a clear indication of the stakes these companies put on generating huge revenues this holiday season. 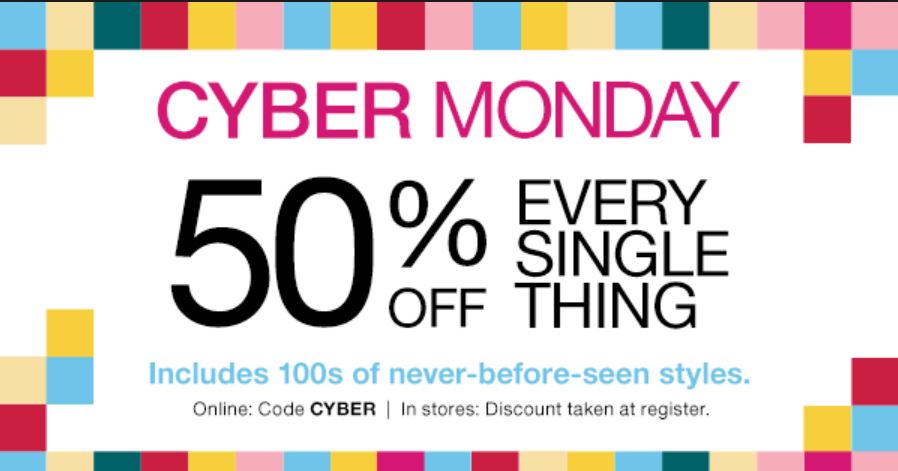 However, the deeper problem lies in these very promotions. Discounting is killing the bottom line at many stores. Retailers like Target’s stock price plunged in recent weeks when it said that its costs were rising, in part from fulfilling online orders. Even powerhouses like Walmart are struggling with a similar problem. Online sales as a whole carry lower profit margins, largely due to fluctuating shipping costs that eat into profit margins. As revenue details of Black Friday and Cyber Monday emerge throughout the holiday season, the data will show whether or not the efforts of these brands can right the ship for some of the struggling retailers.

How Influencers Contributed To The Recent Volatility In Crypto

Dustin Hawley
Cryptocurrency is going through a bit of a rough patch. You could say it was always sort of rough in the cryptocurrency world with the constant volatility, but the trend was generally trending up in recent m
Read post
Post link
Blog

Dustin Hawley
Carl Nassib, a defensive lineman for the Las Vegas Raiders, became the first active NFL player to publicly declare that he is gay. The news caught fire when his Instagram video went live on June 21, and it w
Read post
Post link
Blog

Best Places For Influencers To ‘Gram In 2021

Dustin Hawley
In 2020, the best place for anyone to ‘Gram was their own homes – and the handful of other places one could visit during the pandemic and the lockdowns. However, 2021 is offering better prospects if
Read post